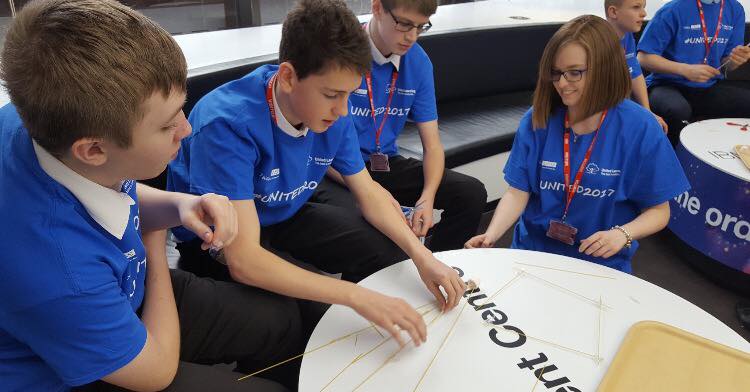 On 27th September 2016, 7billionideas will be kicking off two national competitions with the education group United Learning. We shall be visiting 55 schools in 13 days and proudly launching #UnitedApp2017 for the third year in a row and launching #UnitedIDEAS2017 for the first year.

#UnitedApp is an educational app ideas competition for Year 9 students across the group. Students generate and develop app ideas that they believe could have a national or global impact on education. After the students go through three competitive rounds, the winning idea is chosen and the app is made and will go live by next September. Over the last two years 625 teams have participated and we know students in the schools across the group are eager to get to work developing their app ideas in the hope of joining Nova Hreod Academy (a Maths App which aims to support parents with their children’s learning) and Greenacre School (a Financial literacy app which aims to help teach the meaning behind key terms) as competition winners.

“We are very excited to be partnering with 7billionideas again to launch #UnitedApp2017 through the upcoming roadshows. In previous years, we have been overwhelmed by the positive comments from students and staff about how much they have enjoyed taking part and the impact which it has had in terms of developing leadership and entrepreneurship. We hope that this year’s Year 9s will find it just as valuable.”

In addition to #UnitedAPP, #UnitedIDEAS will be launching, which is an ideas competition for the Key Stage 2 students across the group. Students will be challenged to generate and develop world changing ideas over a 6 week period. The winners from each school will be invited to the first ever #United2017 day next March, which will see the conclusions of both competitions on the same day. We’re delighted to announce that IBM have agreed to host the finals across the UK in London, Warwick and Manchester. Victoria added

“#UnitedIDEAS2017 will give our primary pupils a head start with some of the same vital skills. Alongside our other group-wide initiatives, this competition will help children build their confidence and develop their imagination whilst working with peers from across the country.”

Roll on the roadshow and roll on another successful year in partnership with United Learning.