Off to the ‘Future’! Congratulations to the finalists of #BelieveBIG2019 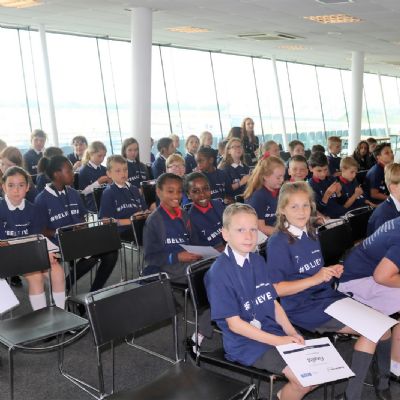 The Believe Big 2019 competition ends with a win from Kettering Science Academy for the project ‘Future’, a rocket that is designed to tackle global food shortage by enabling interplanetary agriculture: ‘Our project was inspired by NASA’s own VEGGIE system’, comment the inventors of the rocket ‘Pacto Vegetabilis’, ‘there was no way to test our idea as we don’t have access to ISS (yet), and so we looked at their findings and data to merge with our own ideas to create what we think is a very efficient system’.

After being asked how the rocket could sustain the right habitat for plants while most effectively using natural resources, the winning team explained: ‘For keeping water, we decided that we would store hydrogen and oxygen because it has much smaller density. Then, we would be able to use electrolysis to separate the hydrogen and oxygen (if combines) that we would then combine to form water. We could also harvest oxygen from the plants as they exhale it to keep creating water.’ An ambitious plan coupled with creative execution – we can only wish that the team doesn’t stop until they eventually get access to the ISS.

While the ‘Future’ certainly won the hearts of the judges, it was but one of many ideas that were developed in the span of this year’s competition, which involved 5 secondary schools and over 1000 students. Given the reach of the competition, more students than ever had the opportunity to think creatively about the global issues that mattered to them by applying skills and knowledge acquired in the classroom.

In addition to involving an ever-greater number of participants, Believe Big is gradually becoming an annual celebration for the community within Brooke Weston Trust. As John Henrys, the Trust’s Head of Analytics, Systems Performance and Innovation, commented: ‘following the success of the Believe Big 2018 competition all of the headteachers were keen to run it for a second year. There has been a buzz around the school when the competitions have been completed and even celebration events taking place in schools afterwards.’ Such a positive reception of alternative educational activities in schools is encouraging and indicative that the joint the initiative between 7billionideas and Brooke Weston Trust hitherto been successful.

To echo the buzz, 7billionideas congratulates all finalist and promises the winning team from KSA to turn their idea into a book in due time.